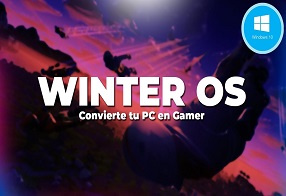 WINTEROS:TLW RFG The Best Windows Optimized for Gaming and Design In The World 2021

WinterOS is the name of the project assigned by its creator Mauro Cerquerio, its main functionality is the complete optimization to make it faster, especially aimed at gamers, being an improvement of Windows 10 21H1.

It is also dedicated to those people who have an average pc or also low resources, we will find additional tools that serve us to optimize our pc.

This excellent OS has exactly the same compatibility with the hardware as the versions of Windows, WinterOs operating system is born as the need to completely adapt to those users who are dedicated to the games.

WinterOS is a system designed for gamers but it also works excellent for pc with low resources, it has deactivated services that are not important for the user recovering essential resources since they will only be working in the background as necessary.

It also has 5 performance modes and tools that serve depending on the use we give, both gamers or basic things, being able to access these tools by pressing shift + right click, having powerful tools for cleaning, optimization, driver installation, among others.

This excellent OS has an optimizer for the dns, also for our connection to the network no matter if it comes from fiber optic or coaxial cable.

It is excellent for the gamers since it has an optimizer for the CPU in order to have a better performance so we will be able to play better even using emulators.

Winter os is installed exactly like any version of Windows 10, using a program to boot a USB drive such as Rufus or ultra iso, or also from the same hard drive, with two versions, WinterOSLTSC and WinterOS21H1, each one with 32 and 64 bits architectures.

Which version should I install? if you have a pc with very low resources (tablet), the WinterOSLTSC version will be useful, if you will use the game bar, XBOX or some game linked with xbox as well as the Microsoft store the 21H1 version is your best option, and for medium and of course modern pc, your best option will be WinterOS21H1.

Its main advantage is due to being a system that was modified winter os iso thinking of gamers, changes were made at the system level in order to achieve maximum performance without having any problem to run a game, compatibility with hardware and libraries for execution are intact.

Windows 10 winteros 2021 has only the necessary files to get the most out of any game, and not only that, home users can also fully enjoy this OS because it has everything you need to get the game out of your PC.

WinterOs has become the best solution for those people who love games, where they can have everything they need when it comes to performance, winteros 2021 with windows 10 21h1 takes all the juice out of your pc to get the desired results and of course, it also works great for home users.